a remix of cut&pasted thoughts about the hierarchization of our senses, the hegemony of vision in the Western culture, the richness of differences between the 'sensoria' of disimilar cultures and traditions and how the senses are shaped by the media we use and other cultural factors...

What is considered a strange blurring of sensation from one perspective, is a normal and 'natural' way of perception of the world in another, and indeed many individuals and their cultures develop sensoria fundamentally different from the vision-centric modality of most Western science and culture. One revealing contrast is the thought of a former Russian on the matter:

The dictionary of the Russian language...defines the sense of touch as follows: "In reality all five senses can be reduced to one---the sense of touch. The tongue and palate sense the food; the ear, sound waves; the nose, emanations; the eyes, rays of light." That is why in all textbooks the sense of touch is always mentioned first. It means to ascertain, to perceive, by body, hand or fingers (Anonymous 1953).

The reference to Russian textbooks treating touch first, in contrast to American psychology textbooks which always begin with sight, is confirmed by other observers (Simon 1957) and serves to highlight how the hierarchization of the senses can vary significantly even between cultures belonging to the same general tradition (here, that of "the West")...

this is related to the ideas around the 'sense ratio', developed and popularised by McLuhan (after his mentor Harold Innis and other guys) who believed that

'media were biased according to time and space. He paid particular attention to what he called the sensorium, or the effects of media on our senses, positing that media affect us by manipulating the ratio of our senses. For example, the alphabet stresses the sense of sight, which in turn causes us to think in linear, objective terms: the medium of the alphabet thus has the effect of reshaping the way in which we, collectively and individually, perceive and understand our environment.'


In addition, within the more anthropological 'sensory cultural differences department', 'The Spell of the Sensuous' by David Abrams seems an interesting and amusing reading. He is an 'ecophenomenologist' and his theories are a mixture of philoshopical thought (based in the phenomenology of perception of Merleau-Ponty) and magic (following his own experience during years of exchange with shamans and sorcerers in Indonesia, Nepal, Sri Lanka...).

from a review of the book:

What happened? If the state of non-separation and identification with the natural world, apparently so accessible to our aboriginal ancestors and neighbours, is our natural state of being, how did he so easily lose it? Further, how have we collectively as a species so easily lost it? These are the great questions at the heart of David Abram's The Spell of the Sensuous.

All the tracks he follows, and there are many, lead him to what he posits to be the single most important technological innovation our species has achieved: the phonetic alphabet. Drawing on extensive anthropological literature, he demonstrates that the way oral, pre-literate cultures experienced the world is radically different from our own. To begin with, time was (is) experienced as cyclical in nature, with great, repeating mythological stories defining the cycle of the year. No meaningful distinction was made between time and space. Story and meaning derived from and were tied indissolubly to place: the body of wisdom developed by a community, often in the form of songs and stories, represented its store of wisdom on how to live well and sustainably in its own, unique place.

... I wonder aloud if it might be possible to develop ways of using our current technological means in order to contribute to reconnect -somehow- with part? of that lost-dormant 'natural state of being'... or better said... with a revision of it, developing new-old-alternative ways of perceiving the world, closer to 'nature' and more sustainable...

When talking about the feelSpacebelt in our first meeting, Edwin mentioned the 'absolute orientation' skills of aboriginal australians... I was curious and found this article comparing aboriginal and western ways of knowing. 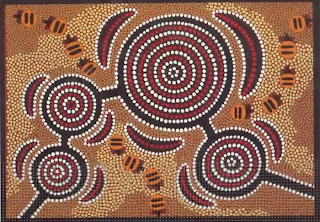 an aboriginal map artistic representation
Posted by [o_Ó] at 9:50 AM


In 1964 Marshall McLuhan wrote his now classic book ‘Understanding Media’, in which he developed a completely new view of what a medium is. Instead of focussing on the content offered by the new, technological media that have been appearing in the last century and a half, he called attention to how the experience of a new medium changes the web of relations between our senses, how it changes the way in which we interpret what we perceive and how it ultimately changes our worldview. For him, every medium is an ‘extension of man’, and every new extension has a profound, total influence on how we sense, think and act. In developing this view he was influenced by the bauhaus artist Laszlo Moholy-Nagy, who was fascinated by the new perceptual possibillities offered by the new media of his time (photography, film, electric sound) and who thought that artists had a responsibility for literally shaping mankinds’ perception of the world.
In science, views on the flexibility and adaptability of our senses were developed by the Mexican/American scientist Paul Bach-y-Rita. In a series of far-reaching experiments he showed the incredible extent to which our perceptual system can adapt in real-life situations. This ‘Sensory Plasticity’ was most dramatically demonstrated in a series of experiments in which Bach-y-Rita restored sight to a number of blind people. He gave them a crude interface that translated a camera image into a series of tactile impulses on the skin. After a short period of accomodation these people reported visual sensations, and they could recognize objects, move through spaces or even catch a ball thrown at them. As a kind of cyborgs they were truly seeing, not through their blind eyes, but through their interface and their skin. Key to the success of these experiments was that the people involved could move around with their interfaces and use them in real-life situations, in which perceptions are always related to intentions, bodily movements and actions.
In this research group we want to apply this perspective on the plasticity of our senses to interactive art. We are going to develop and build (preferably wearable) interfaces that will enable us to navigate through the world on the basis of information to which we normally have no access. We are going to try and build new senses. In order to translate these normally imperceivable aspects of the world into sound, image or tactile sensations, we will study different approaches to sonification, visualization and the tactilization of data. Also we will have to think about the environment for which we build these senses and perhaps design a special environment for them.