I would like to start using this blog to throw more specific ideas about projects we might undertake in the coming weeks... being interested as I am in the exploration and extension of our listening and sound perception, I find the border between hearing and touch as an attractive area to investigate (check bone conduction of sound)... also after a couple of conversations these days I found we are several people in our group interested in tactile sound... therefore I´m posting here the topic, illustrated with some artworks I know which make use of this phenomena... please, add more that you might know... 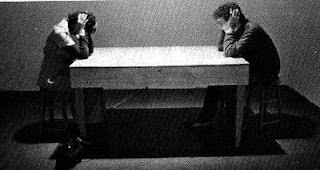 Laurie Anderson’s Handphone Table. 1978 Visitors were invited to perceive sound through the bones in their arms by placing their elbows on the table.

Touched echo (2007, by Markus Kison) is a minimal medial intervention in public space. The visitors of the Brühl's Terrace (Dresden, Germany) are taken back in time to the night of the terrible air raid on 13th February 1945. In their role as a performer they put themselves into the place of the people who shut their ears away from the noise of the explosions. While leaning on the balustrade the sound of airplanes and explosions is transmitted from the swinging balustrade through their arm directly into into the inner ear (bone conduction).

...experienced in the latest edition of ArsElectronica too. 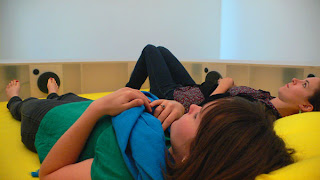 music for bodies is a research project to make new 3D music and physical interfaces for enjoying it directly through your body rather than just your ears.

music for bodies is currently researching the effect of certain frequencies on specific areas of the human body, coming to an understanding of the human body’s response maps in this process. Combined with an exploration into mapping structures for scores through architectural perspectives, it is making music to feel rather than listen to. 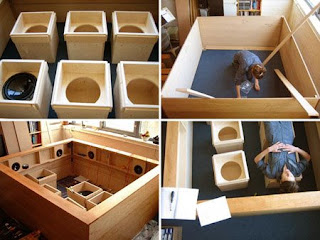 STiMULiNE is an audio-tactile performance by the artists Lynn Pook and Julien Clauss in which the group of participants wears futuristic seeming suits equipped with acoustic activators that transmit sound as an impulse on skin and bones. Sounds are thus not perceived through the outer membrane of the ear but are transmitted as the finest of vibrations through the entire body to the inner ear. It is a form of fictional concert without narrative structure that starts from the assumption that public sites for culture in real space will increasingly be replaced by virtual communication. STiMULiNE departs from the traditional concert situation and experiments with forms of perception of space and body. The participants lie relaxed on the floor while the two artists let the sounds move along and through the bodies. The presence of the public and the social interaction between the participants thereby becomes a central creative element. 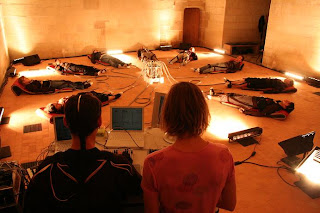