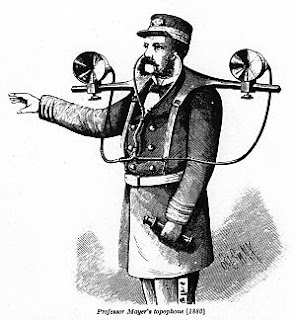 Acoustic location is the art and science of using sound to determine the distance and direction of something. Location can be done actively or passively, and can take place in gases (such as the atmosphere), liquids (such as water), and in solids (such as in the earth)

Starting in 1880 with the Topophone, there is a bizarre collection of acoustic location experiments and artifacts, including hilarious wearable artifacts, some of them of doubtful precision. 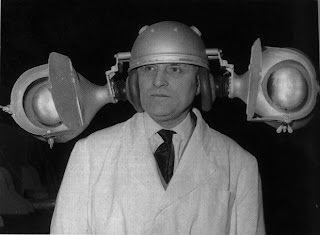 During WW1 and until the early years of WWII this technologies were developed by different countries for militar purposes, until its abandon when the sonar and radar came up, making them obsolete. 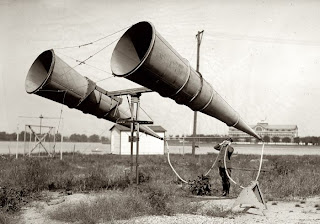 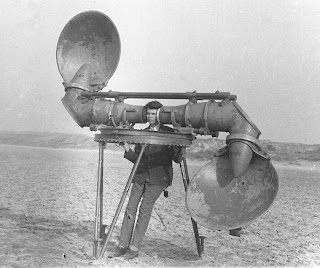 +++ more info and historical survey on this site.


In 1964 Marshall McLuhan wrote his now classic book ‘Understanding Media’, in which he developed a completely new view of what a medium is. Instead of focussing on the content offered by the new, technological media that have been appearing in the last century and a half, he called attention to how the experience of a new medium changes the web of relations between our senses, how it changes the way in which we interpret what we perceive and how it ultimately changes our worldview. For him, every medium is an ‘extension of man’, and every new extension has a profound, total influence on how we sense, think and act. In developing this view he was influenced by the bauhaus artist Laszlo Moholy-Nagy, who was fascinated by the new perceptual possibillities offered by the new media of his time (photography, film, electric sound) and who thought that artists had a responsibility for literally shaping mankinds’ perception of the world.
In science, views on the flexibility and adaptability of our senses were developed by the Mexican/American scientist Paul Bach-y-Rita. In a series of far-reaching experiments he showed the incredible extent to which our perceptual system can adapt in real-life situations. This ‘Sensory Plasticity’ was most dramatically demonstrated in a series of experiments in which Bach-y-Rita restored sight to a number of blind people. He gave them a crude interface that translated a camera image into a series of tactile impulses on the skin. After a short period of accomodation these people reported visual sensations, and they could recognize objects, move through spaces or even catch a ball thrown at them. As a kind of cyborgs they were truly seeing, not through their blind eyes, but through their interface and their skin. Key to the success of these experiments was that the people involved could move around with their interfaces and use them in real-life situations, in which perceptions are always related to intentions, bodily movements and actions.
In this research group we want to apply this perspective on the plasticity of our senses to interactive art. We are going to develop and build (preferably wearable) interfaces that will enable us to navigate through the world on the basis of information to which we normally have no access. We are going to try and build new senses. In order to translate these normally imperceivable aspects of the world into sound, image or tactile sensations, we will study different approaches to sonification, visualization and the tactilization of data. Also we will have to think about the environment for which we build these senses and perhaps design a special environment for them.