some rapid thoughts about one of our latest meetings on which we discussed McLuhan´s theories:

....regarding his visual vs acoustic space categorization, I remember some doubts expressed in class comments about the meaning of his 'acoustic space' idea regarding our (well... this was a while ago) cultural and media environment, arguing certain lack of validation in the real world .... as I understand it, its not something to be taken literally (in terms of regarding it as a proliferation of sound-based media or 'real' sound), but more as a metaphor for the 'new mediascape' appearing during the last century, on which media and technologies surround us, being multisource, intangible and global and becoming pervasive... elements pertaining to sound physiology, hearing and according to him characteristic of previous iliterate oral cultures... these characteristics as opossed to the previous model generated by the apparition of printing based for example in a limited amount of sources of information, frontality, textual linearity.... pertaining more to the eye and geometry of vision...bla bla bla 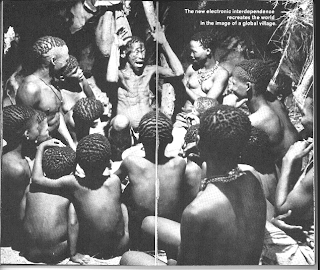 ...I think that notion of the 'acoustic space' presented by McLuhan even if could be related, should be differentiated from the several branches of works, concepts and theories (also appearing in the second half of 20th century) that claim for the construction of alternative knowledge models based in sound, denoting the hegemony of vision in our Western culture.

Without entering now into regarding this hegemony of vision as problematic or not, neither speculating about its possible causes, consequences and effects, I think its evident the fact that it exists, even if I still find sometimes people who doubt about it. Its just obvious to me if we take into account the lack of sound-based studies and theories in lots of disciplines... note for example how we have in the world maybe only ¿4? academic programs devoted to 'Sound Studies' (also of very recent creation), in contrast with the widespread 'Visual Studies' discipline.. in addition to the lack of sound education and the marginality of sound-based music and artworks, to name a few examples.. the list could go on and on... of course this is something relative and it is changing rapidly, being evident the proliferation (small the scale but definitely a good number of projects) of sound-based inquiries and works within a lot of fields dealing with sound and most importantly, a great amount of interdisciplinary work dealing with it, caused also by the increasing accesibility of technologies to work with this medium, that became imprescindible in order to analyse aspects of it due obviously to its time-based nature.

Anyway, I think in general we are currently very hard-wired because of our culture, education and our mediascape and environments to think in visual terms... somebody was pointing out the other day to the pervasiveness of mobile music devices (ipods and so on) as a sign of the changing times... that´s a fact, but I would doubt if it as a sign of an increase in sound awareness or maybe works doing the oppossite, I see more the use of this devices as another manifestation of power and identity and actually when used in public spaces this technologies dramatically shut up the sounds of the environment, not to mention the hearing loss problems which sometimes cause. Anyway these kind of sound mobile technologies have also great potential por sound and mdia-art and actually are bein explored by several people...check mobile sound blog for example..

On this issue of hegemony of vision and the rediscovering of sound awareness I would like to share the recording of a recent short lecture by Murray R. Schafer, whose life-long pioneering work within the fields of acoustic ecology, soundscape studies, sound education and towards the promotion of aural culture at large is very remarkable... his book 'The Soundscape. Our Sonic Environment and the Tuning of the World' , published in 1977 is very recommendable and I feel listening to himself (like in this recording) as quite inspiring.

The lecture was given in Mexico the last month and has the title 'I HAVE NEVER SEEN A SOUND'. 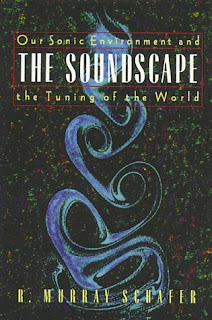