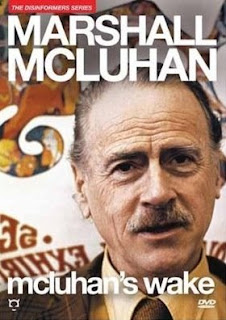 This is a film documentary about McLuhan´s theories and his biography. I think it works quite well as a an introduction to his work.

It must be available in the torrent world and I got the dvd version released by Disinformation a while ago, which could be worthy because it contains a good amount of extras in the form of interactive tetrads, audio lectures, extra interviews, etc... so if someone is interested let me know, I can bring it to KABK.

As far as casual viewers go, it’s hard to go wrong with McLuhan’s Wake. It offers an impressive introduction to McLuhan’s four media laws, which are a bit out of date but still useful in developing a fundamental knowledge of media and cultural studies. If you are already well versed in cultural theory, it won’t be very useful unless you teach media studies, in which case it could prove to be a valuable resource. Some of McLuhan’s ideas and concerns have become even more relevant since his death, even though he hasn’t been able to update his own writings to incorporate these new mediums and technologies. Like anything, McLuhan’s Wake needs to be approached with caution and a critical eye. McLuhan would have wanted us to approach his own theories like that, I think. If only the creators of this set had done that a little more. Reviewed by Judge Joel Pearce