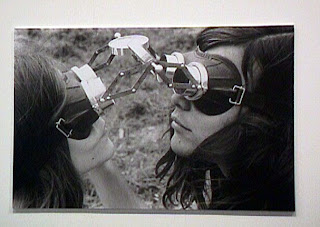 Lygia Clark (Belo Horizonte, October 23, 1920 – Rio de Janeiro, April 25, 1988) was a Brazilian artist best known for her painting and installation work. She was often associated with the Brazilian Constructivist movements of the mid-20th century and the Tropicalia movement. Even with the changes in how she approached her artwork, she did not stray far from her Constructivist roots. Along with Brazilian artists Hélio Oiticica, Ivan Serpa, and Lygia Pape, Clark co-founded the Neo-Concretist art movement. The Neo-Concretists believed that art ought to be subjective and organic. Throughout her career trajectory, Clark discovered ways for museum goers (who would later be referred to as "participants") to interact with her art works. She sought to redefine the relationship between art and society. Clark's works dealt with inner life and feelings.

Experiments:
Caminhando- The participants are each invited to take a pair of scissors, twist a strip of paper and form a Mobius loop out of it and continuously cut alone the plane. This is the art experiment in which Clark commented that the meaning of this particular experience lies in actually engaging in the activity.

1966: Air & Stone- A small plastic bag was filled with air. A stone is then placed on the bag and the participant squeezes the bag to experience the heft of the space and the weightlessness of the air inside the bag. The rock begins to show qualities of a living organism. In this experiment, Clark played with the concept of opposites such as emptiness and fullness and air versus solid.

Abyss-Masks- The participant's eyes were blindfolded and large bags of air weighed down with stones could be touched giving off the sensation of empty space from within the body.

The I and the You: Clothing/Body/Clothing- A man and a woman wear hoods over their eyes and a full body suit and during this experiment, each would come to understand their own gender by feeling through their pockets